Ask herself how she could have been so stupid and go into the jungle as an arachnophobe, of course.

I think I really believed it would be a brilliant idea for a confrontational therapy, but the reality looked a bit different, and in the end imagination was even worse than reality. At some point, my mind’s eye saw tarantulas lurking about everywhere, although I was lucky and saw only one – one more than I need in life. It didn’t help that this nice Australian gentleman assured me that the straw roofs were full of them, „that’s where they live“. Information you don’t need when everywhere you sleep, shower and eat is open and has straw roofs. And then there were of course various other less hairy 8-legged beasts, as well as giant ants, worms, bugs, mosquitos, giant flying unknown objects, etc. That’s jungle for you. The family of mice in a group member’s mattress was in Quito, though. 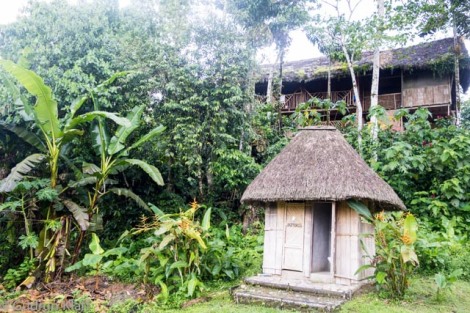 A toilet (men’s toilet inclusive of a black scorpion), behind, the sleeping quarters 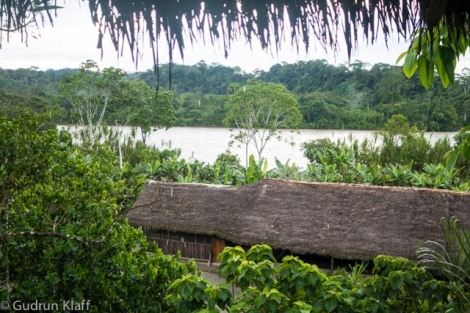 Digging for gold in Rio Napo

Dancing
At least I can now look at pictures of spiders – so it wasn’t completely unsuccessful. 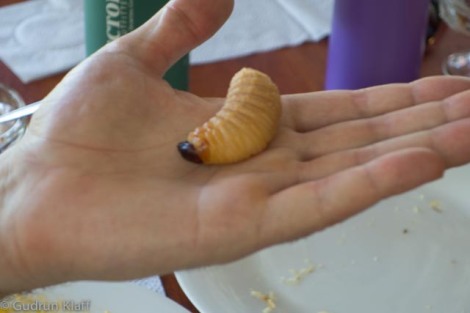 Worm Willy before meeting the grill

Worm Willy after meeting the grill. You can also eat him alive and wriggling. You don’t have to though.

I was (will still be for 1 day) in beautiful Ecuador – Quito, Amazon region, Banos, Otavalo, Quito. And of course the middle of the world – here I am sitting right on the equator line.

With a very nice travel group, beautiful landscapes, many activities, and the confrontation with a second phobia: If you don’t like heights, stay away from Ziplining – a mystery why I look so happy on these pictures.

The travel group – before the ziplining 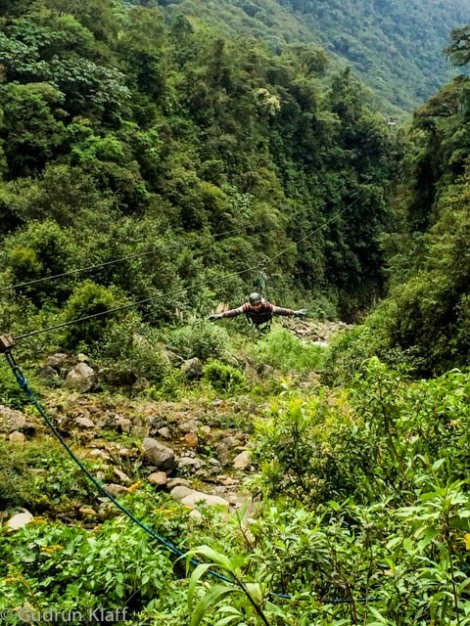 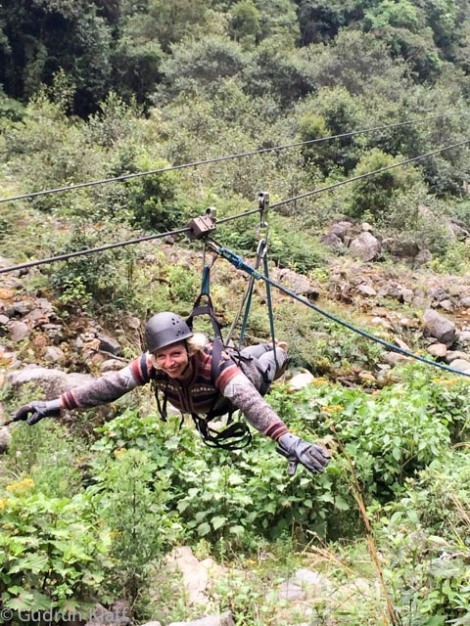 I’ve promised myself that I’ll only do peaceful, harmless things for the remainder of my journey. I did however receive a nice tiara from my travel companions for breaking glamour records when stylishly climbing up a muddy mountain and ziplining down again in golden flipflops (especially stylish with this Wehrmacht helmet). By the way, I notice that I have quite a number of pictures of myself this time, but all taken without selfie-stick, I promise!

Quito is a very, very long city – between 50 and 60 kilometres long, depending on the source of information, at 2800 metres altitude and surrounded by volcanoes. The Easter procession was worth seeing, with many people in purple KKK-outfits, many cross bearers and people who ruined their bodies with barbed wire or cacti. 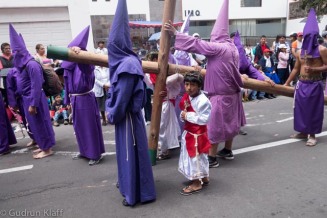 Quito is also one of those cities beloved by pick pockets, and a woman in my group nearly became a victim of theft – the thief was pretty inept though, and the police got him within 2 minutes flat, including the stolen goods. 10 frustrating hours in a police station later and despite a very weepy apology, the young man was sentenced to 15 days in prison and directly booked in – that’s what I call swift justice! Both public defender and the judge had tried to convince the victim to accept the apology and let the thief walk free, but she’s a tough Scottish woman and no bleeding heart and told the judge exactly what she thought about beautifying Quito’s theft statistics this way (I think, „falsify“ was the word she actually used), and the judge listened demurely and then passed the sentence. 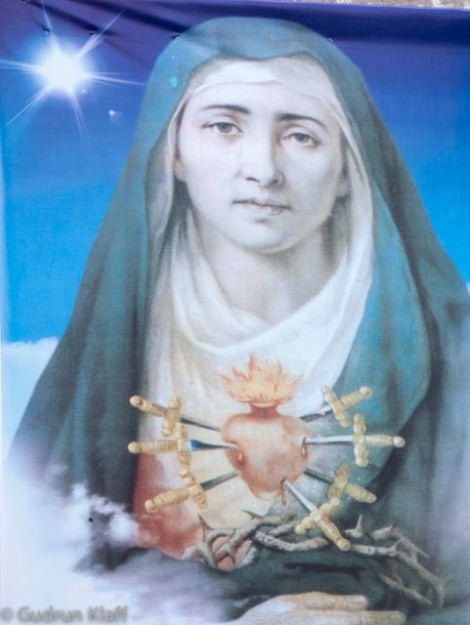 And lastly: All countries have their own little delicacies, and in Ecuador, that’s “cuy” or guinea pig. Looks like a grilled rat, tastes like chicken legs. 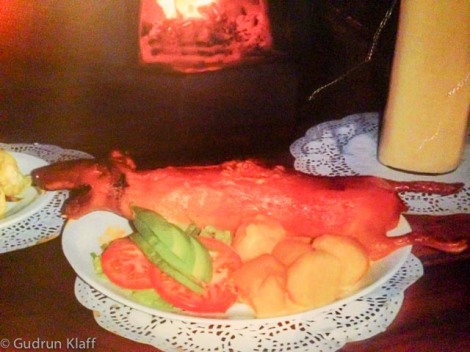 Thursday I’ll fly to Cuba, and as the model nation of planned economy has spent only little time planning for internet, I’ll be off the grid for 4 weeks. By mid May I’ll hopefully show up in Canada. I wish everybody a wonderful time until then.

15 responses to “What Does an Arachnophobe Do in the Jungle?”