You know you found a (temporary) home when even the beggars in front of the door greet you with „welcome back“. I am back from Tibet, will spend a few days in the Rokpa Guesthouse in Kathmandu, before heading off to Junbesi on Wednesday, via local bus and 3 days walk. I’ll be there for a month to teach English, help with IT, and perhaps organize the school library.

I didn’t have an internet connection for the last few days, so I only heard of the disaster on the Mount Everest’s Nepalese side upon my return – it happened at the same time that I was standing on the Tibetan side, struck with awe by the sight of the highest mountain on earth – (assumed) 16 Sherpas died as they prepared the way for the May mountaineers. Of course this shocks me, especially as I am here much closer to events and understand better than before, not just the tragedy itself, but also the consequences for the families, who often have lost their only breadwinner. The Nepalese government has promised to pay 400 Dollars support to each concerned family, but this will of course not last long. The school in Junbesi is one of those that were founded by Sir Edmund Hillary for the education of Sherpa children, therefore the disaster will be felt there. I intend to investigate on site how I can help.

In the meantime, here are a few impressions from my journey through Tibet – it was exhausting, freezing cold, under sometimes very questionable hygienic conditions – and an unforgettable experience, the peak of course being Qomolangma herself, the Holy Mother of the Universe, the Roof of the World in the Abode of Snow – Mount Everest. 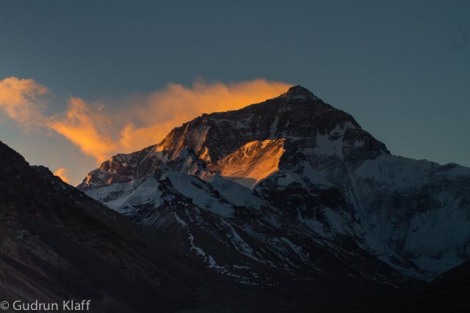 It is a great moment to see the Himalayas (= abode of snow) for the first time.

Mount Everest itself does not look impressive from afar, but once you stand in front of it, words are lacking, and it is difficult to leave again – the fascination this mountain has held for many for decades is understandable. 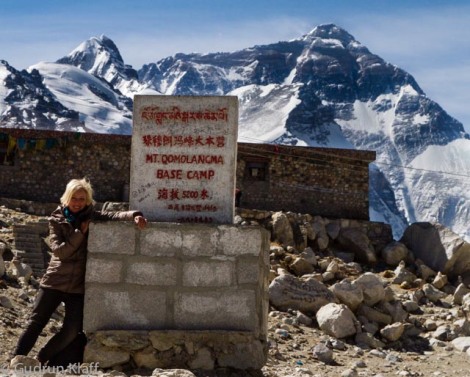 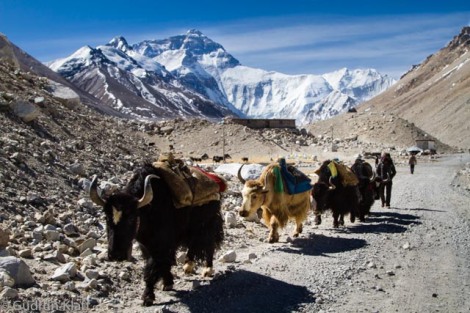 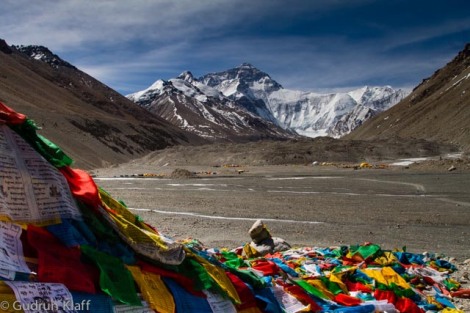 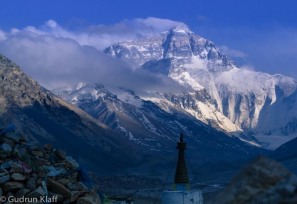 I have no ambitions to make it to the top – not only is the most recent disaster a reminder of how dangerous the mountain still is and will always be. I’ve gasped so much for oxygen these last days – at an altitude of more than 5000 metres even the fight with the duvets when turning in bed nearly kills; not to talk about walking up 30 metres in height – the panic when the body does not get enough oxygen – I was not born for heroic sporty deeds. Plus, altitude sickness feels like a very strong hangover, without having drunk one drop of alcohol. But I admire even more those who take the challenge.

I’ve already written about the Tibetan style toilette. Now I know that they are also used socially. I was just more or less squatting there, minding my own business, when the toilette lady came in and lighting some incense next to me. She looked down on me, I looked up at her, we nicely smiled at each other (did she want to tell me something with the incense? Shortly afterwards I had a struggle to free my favourite ring from her fingers. The one thing has nothing to do with the other).

Again a toilette Tibetan style, in a deserted area close to the Himalayas, the hut made from cement, with a rectangular hole in the ground. I felt rather astonished when a cow looked at me through that hole – it’s not exactly what you would expect to find in your „toilet bowl“. I took a quick picture, then she fled. I decided to become a Vegetarian with immediate effect.

A pretty rock out in nature is a wonderful substitute for the often somewhat disgusting Tibetan style toilets.

Why does one become obsessed by the thoughts of toilets?

There are no radar cameras in Tibet. Instead, every 40 kilometres or so one has to stop at a police checkpoint, where they measure the time between checkpoints and determine your average speed. As a result, one frequently stops for loo breaks, to make sure one isn’t too fast. Now, you could feel shocked that the Chinese – technologically so advanced – have not managed to copy radar cameras from Germany yet, but consider: These checkpoints are wonderful to record who drove when to where… honi soit qui mal y pense.

By the way, you can pay to avoid loo breaks.

A restaurant close to the seat of the Panchen Lama. We enter, there are no other customers, only the (probable) owner and her young daughter and the (perhaps) mother who’s also the cook. They stare at us as if we’ve dropped from Mars. Finally the owner dares to come closer, and continues to stare at us, wordlessly. We try out our Tibetan: „Momo?“ (the only Tibetan meal we know the name of – damn hard, eh?). They continue to stare at us, wordlessly. „Momo? Momo?“. Stares. We just want to give up, when the young daughter cries: „Momo!“. We nod eagerly: „Yes, Momo, Momo!“. Happy beaming from all sides, we understand each other. And indeed, momos arrive, which we eat whilst being stared at, and they taste wonderfully.

In one region of Tibet, women can marry up to three men. Until 1959, men could also have three wives. I tried to imaging what would happen if the three wives also had three husbands who had three wives who had… etc. Soon, the entire village would be married to each other, and the consequences for the next generations could be interesting.

The permission for female polygamy sounds amazingly progressive, until one asks further questions, because it is anything but. It’s like this: Brothers may share one wife, and not like this: Women can choose any which men. The whole thing has economic reasons – one brother can work the fields, one brother worry about the house, and one brother travel to earn income, and everything is hunky dory at home, and the offspring will come. What do the women say to this? Who knows. Three by the way doesn’t necessarily stop at three. 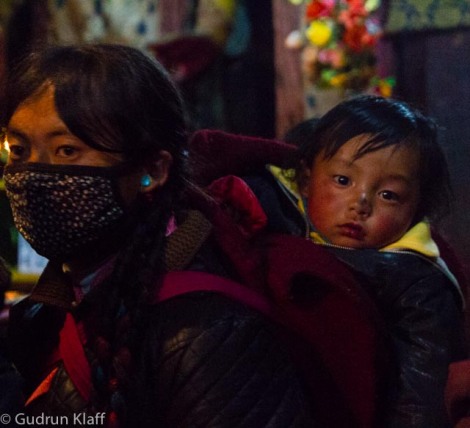 Cola flows upwards at an altitude over 4000 metres, biscuit bags bulge (we didn’t manage to explode one though), water bottles buckle, and water boils at ca. 87 degrees centigrade. Just some of the things we had fun with.

No, not again a lengthy report with pictures – mainly because the Chinese do not allow tourists to visit funeral sites. Nevertheless, I thought I’d mention Tibetan funeral customs, because I think that they are a further interesting variation on how different religions or people handle death and the dead (warning: the following might be slightly upsetting).

In Tibet, the dead are transported to re-incarnation via sky burial. A Lama reads from the Tibetan Book of the Dead, to encourage the soul to leave the body; then, an undertaker dissects the body and feeds the parts to vultures (in Tibet, vultures are regarded as holy animals). These carry the dead to Bardo, a state between death and re-incarnation.

The practical background was once the hard earth and the lack of firewood – Tibet has an average altitude of 4500 metres, and there are very few trees or bushes, but a lot of iciness. 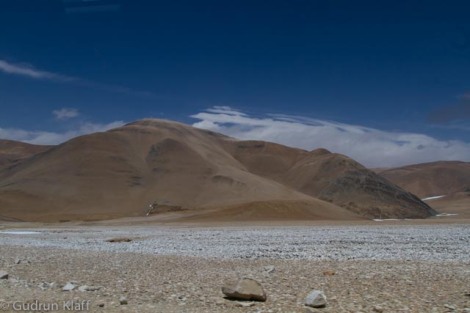 Nowadays, mythical and religious reasonings have taken over. Sky burials are especially known amongst the Parsi of Mumbai (although they’ve nearly run out of vultures, which is a real problem); in Mongolia, they’ve mainly been replaced by earth burials.

A report about Tibet without mentioning Buddhism is not a report about Tibet. I don’t want to discuss the religion in detail, just show a few pictures. Tibetans are an extremely religious people – that often seems to be the only thing left to them. A lot of money is given to the monasteries by very poor people, everywhere there are prayer wheels, people prostrate themselves on the ground, pilgrims ask for money. The surviving monasteries and temples are beautiful, with a lot of golden statues of Buddhas, Bodhisattvas and demons. 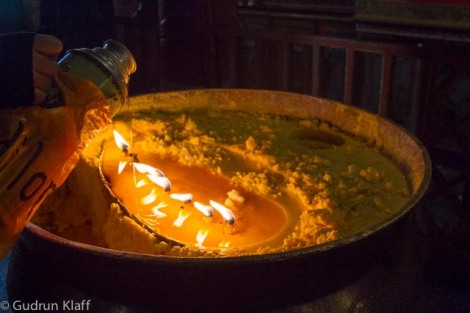 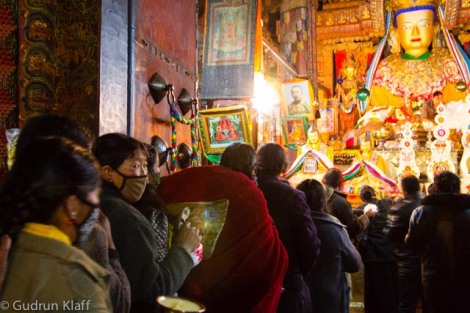 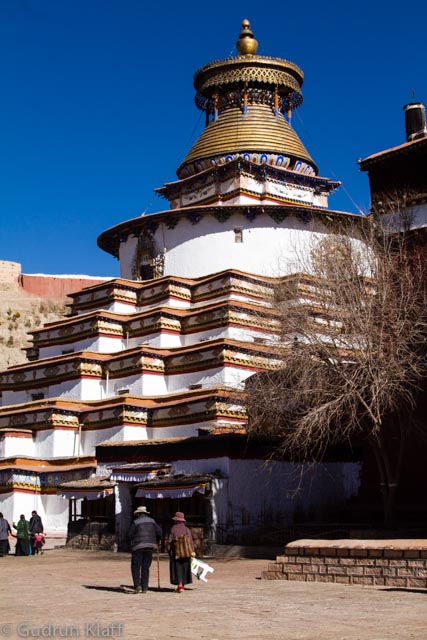 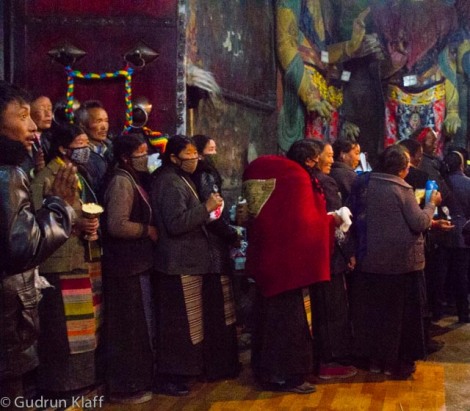 Especially the older people are drawn to them. I find that many of those have beautiful faces – deeply wrinkled, with serious expressions that can change to an impy grin within the blink of an eye. Unfortunately, they don’t like having their picture taken, therefore these will remain in my head and can’t be shown on this blog. 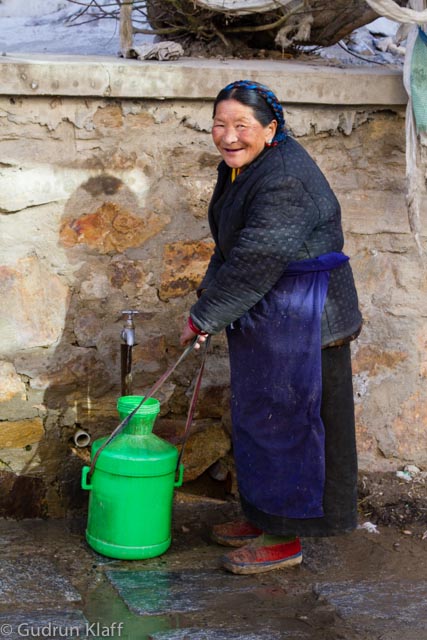 It is cold in Tibet. Very cold. We were there in April – technically spring time, but still belonging to the winter season – and it was very very cold. Unfortunately, Tibetans don’t like heating – although there are cow and yak dung „cakes“ lying everywhere, these are mainly used in the kitchen (for fire!), and not for general heating.

Unfortunately, Tibetans also don’t like gloves – an endless hunt through Gyantse, to find a pair – or woolen hats – here I only found one in Shigatse. They do like padded long underwear, which gave me a rash all over my legs – probably the revenge of the yak. The further you get from Lhasa, the less often you get hot water, and at some point, there isn’t even water from the tap, just a bucket of ice cold water to clean the toilet (if there is one). The nights one spends under a mountain of duvets that take away one’s last breath. 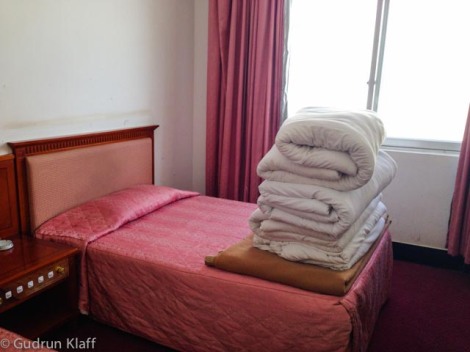 But all is forgotten when one sees the – literally – breathtaking nature or stands in front of Mount Everest – the hardship is well worth it, it’s an unforgettable trip, in a country in which the people are much friendlier than the harsh environment. 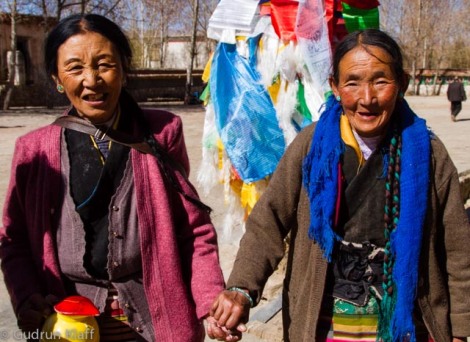 And finally, a word regarding China: I don’t want to get into the lengthy arguments, booby traps and generally political minefield that is the Tibet Autonomous Region. Tibet was really already conquered by the Chinese in 1720. As usual, the Brits started meddling at some point, before Tibet proudly declared independence in 1913. China kept stumm, until 1949, when they started to have designs on Tibet under Mao; in 1950, they marched in, and Tibet was „integrated“. In 1959, there was a bloody rising of the Tibetan people, tens of thousands of them died, and the Dalai Lama fled to India, where he has been leading a government in exile from Dharamsala ever since. Monasteries and thousands of cultural treasures were destroyed. Officially, no country has protested against Tibet’s integration into China; unofficially, many countries at least support the Tibetan government in exile. 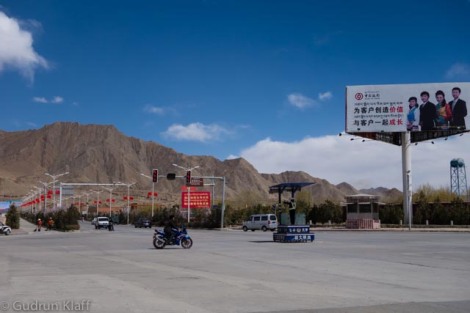 The presence of China is unmistakeble. Not only the checkpoints, ubiquitous military barracks, Chinese letters on boards and signs that are at least twice as big as the Tibetan; the Chinese craze for buraucracy and order (the border between Tibet and Nepal is a wonder one has to have seen – without warning, one stumbles from the tiled, orderly, regimented Chinese emigration hall into the absolute chaos of Nepal – two worlds colliding). 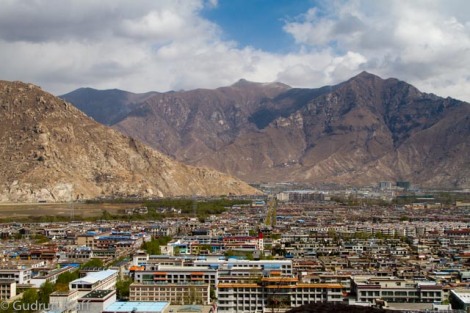 The Chinese stamp is also imprinted on the cities – Lhasa, Shigatse (the second largest city), Gyantse – all are – sorry – ugly new cities, with impersonal streets, shops full of cheap crap, loudly blaring Chinese pop music, functional uniform blocks of flats. The Tibetan parts of town are small but beautiful – narrow lanes, old Tibetan houses, little restaurants, old temples – full of charm and atmosphere. It is to be hoped that they won’t go the way of old city districts in China and be crushed by bulldozers – this would be a new tragedy for the country. 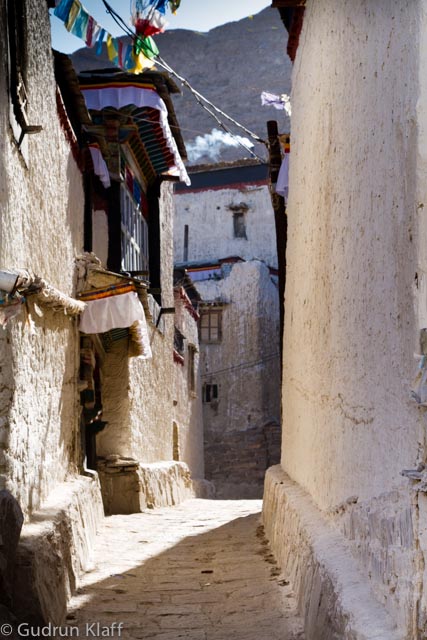 And the last word: The Panchen Lama is, after the Dalai Lama, the second highest authority in the country, and spiritually even above him (some say). There can be only one, but as both the Chinese and the Tibetans have chosen one, there are now two, and both live in Beijing – I leave this without comment. It does however say something about what may happen when the current Dalai Lama is no longer with us, and they start looking for his re-incarnation…