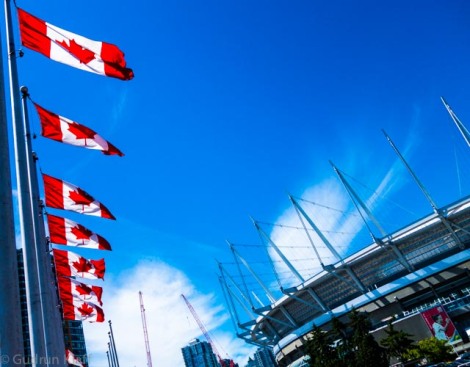 Forgive me because I was too lazy to write in the last weeks – but perhaps I was just laid back, in a land far to the North, second largest country in the world, but only no. 37 by population, a land of extreme winters and mild summers, with people who’ve just been voted „the most polite people in the world“ (although, one thing: Do not stand in their way in their rush to the subway and home; in the relative anonymity of the crowd lies freedom from politeness).

Canada – compared to its slightly more conspicuous neighbour in the South, rather an unknown quantity. Normal prejudices include: They all are loggers or Royal Mounties, hunt moose or grizzley, play ice hockey, they have some sort of fascination with maple leaves, and live in small cities, apparently in iglus (eh?).

So the first surprise was the sheer size of Toronto – over 5 million people live in the North of Lake Ontario (well, do you still remember the name of all 5 Great Lakes? … Sure: Ontario, Michigan, Huron, Erie, Superior). No iglus anywhere, just a very modern city with skyscrapers in the financial district, a very high number of German-brand vehicles of the upper and uppermost class, affluent neighbourhoods, a lot of art and culture – a city in which to live and feel well (if you have the necessary petty cash). 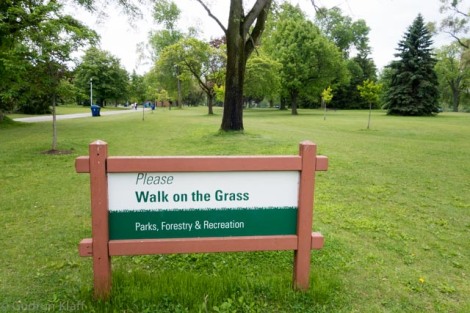 After months of Latinamerican challenges I had arrived in a „civilzed“ country (in terms of: standards look familiar), could convince the friendly immigration officer that I had no intention of staying permanently (at this time, I didn’t know Canada yet, though), and parked myself in the home of a friend who’d I first met in Myanmar and later in the ashram in India. This friend was in the process of selling her house to go travelling, therefore I could repay her kindness by packing a few boxes.

I don’t trust any country that looks around a continent and says, “Hey, I’ll take the frozen part.” – Jon Stewart

A world travel, unlimited vacation – must be relaxing and resting, one would think. I thought so, before my travel. The truth is, that – if you only do it long enough – permanent traveling is quite exhausting, – I think in my case it’s a combination of: By now 17 months of living out of my suitcase; in countries where infrastructure can present somewhat of a challenge; immersing myself in cultures and languages that are not my own; and all that with a low budget. There is such a thing as having too much of a good thing.

So I arrived in Canada more exhausted than I realized, and needed rest. Life in my friend’s house certainly helped, where I had my own area, was being supplied with wonderful meals, helped to spare the wine bottles from the fate of storage, and had a great time. We spent some days further North at the cottage of another friend – „The Cottage“ seems to be some kind of activity for Canadians, on account of masses of water, so that many have a house at a lake – great. Water, sun, hot tub and mosquitos – apart from the latter I could have staid a long time. Very restful.

Canada is infamous for its tough winters, but people with tough winters have a special love of life as soon as the first rays of sunshine invite to sit outside.

Thank you Kim, you’ve been a wonderful host, and maybe one day you can help me move house? And Thank You to all the other great people I met!

The Canadian version of Julius Caesar’s memoirs? I came, I saw, I coped. – Clive James

Then I took the train to Quebec, to meet old friends from olden GMAC days. Quebec – beautiful, French, the spirit of yesterday blows through steep alleyways, a city of tradition, and the perfect place to sit on a terrace on an old cobbled square, cold beer in hand, and reminisce of old times with good friends. Denise and Sam, great to see you again. 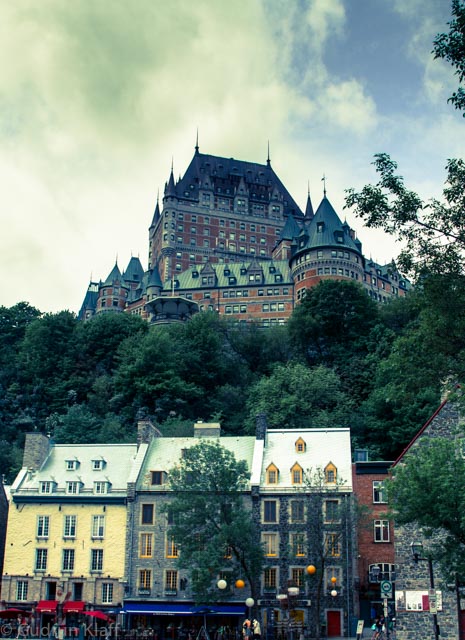 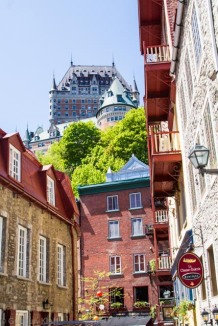 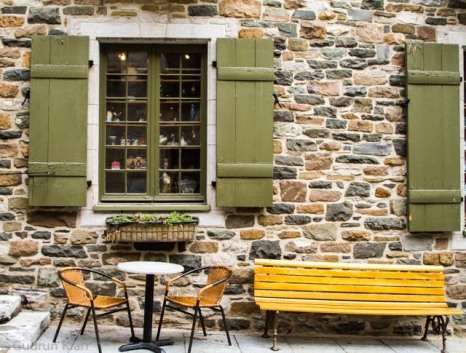 And finally I travelled to the other side, to Vancouver – met friends there too, whom I’d met earlier in Santiago, Quito and Havana – the world is indeed small. Vancouver – city of water and parks, slower than Toronto, a city that celebrates sommer days, beaches and lust for life. 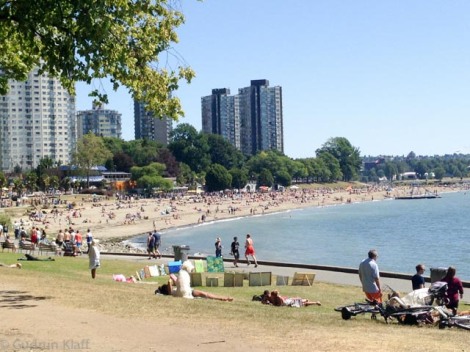 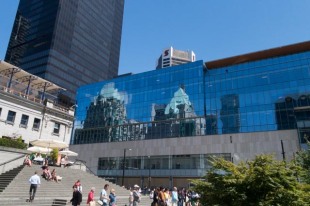 Also a venue for the women’s football worldcup – not that it was noticeable, unless you went to the stadium which we did – and because the USA played, the stadium was a dream in blue red white, full of happy people who enthusiastically cheered on their women folk. The opponent was pretty much invisible in the audience – I counted about 9 brave Nigerians who gamely showed ther green-white flags and t-shirts. I must say that the match wasn’t exactly entertaining, to say it mildly, but it was enough for a 1:0 victory for the US. 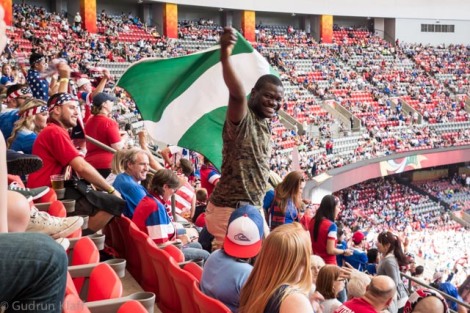 I admit: I’ve taken a shine to Canada: A mixture of rest & relaxation, the scent of the familiar, very pleasant people, beautiful cities, great nature, and a laid-backness (if this word exists), a stoicism that seems to be typically Canadian. They don’t take themselves quite as seriously as their Southern neighbours can be prone to do, and should really have „live and let live“ as their motto. Instead, they have the beaver, and not much good to say about it:

The beaver, which has come to represent Canada as the eagle does the United States and the lion Britain, is a flat-tailed, slow-witted, toothy rodent known to bite off its own testicles or to stand under its own falling trees. – June Callwood

And they seem to have a slight obsession with their neighbours in the South, while these apparently are only vaguely aware that there is someone on top of them:

Canada is like a loft apartment over a really great party. Like: “Keep it down, eh?” Robin Williams

God Bless America, but God help Canada to put up with them! Anonymous

My only regret – and as my blog is saying, you only regret the things not done: I didn’t do enough in Canada. My dream now is to rent a mobile home some day and drive through Canada’s vastness, which I could only admire from the plane. You have to have dreams.

Take off eh! – The Mackenzie Brothers