I knew there was a reason to feel a bit suspicious towards Chile (quite independently from own personal experiences): That country is greedy! Nearly 5000 kilometers of coast line weren’t enough, it just had to take away Bolivia’s meagre 500 kilometers as well, thus making it into a landlocked country, with all the negative effects on trade, export and tourists in search of a beach holiday. Shame on you, Chile!

Ok, perhaps Bolivia had started it all, when in 1878, it heavily taxed a Chilean company on Bolivian soil, against all agreements; and perhaps the borders were never quite clear after the Spanish had been kicked out, but still… In any case, there is no subject that obsesses Bolivians more than that trauma, it’s frequently being quoted as THE reason why Bolivia is a poor country (why is Austria not a poor country, by the way? Or Switzerland? Liechtenstein? Luxembourg?), and they staunchly stick with their marine war flag whose biggest star represents the lost land, as a symbol that Bolivia will not give up to regain its coast.

During the last 2 weeks I was in a silver city where I climbed through a silver mine; visited Bolivia’s inofficial capital – La Paz (the official capital is Sucre (did you know?), although La Paz has both the parliament and the presidential palace); and stood on the birthplace of the sun in Lake Titicaca, looking onto that of the moon.

“Cerro Rico” – Rich Hill – Mountain with previously the highest source of silver in the world, by now a maze of tunnels

Potosí is the City of Silver and also the highest city in the world at 4100 meters. At the time of the Inkas, Cerro Rico, towering over the city, contained the highest silver occurrence in the world, the reason why Potosí was a star in the Spanish empire, with fatal consequences for the indigenous population, as can be imagined. When the price of silver crashed, the miners switched to tin. Today, after also the price of tin crashed, work in the mines has reduced considerably, but there are still thousands digging for silver, tin and minerals, at conditions that haven’t improved much over the centuries. And they merrily blast tunnels, without an obvious plan. One day the headline will read: Mountain cave-in in Potosí. The mine workers are happy about presents of dynamite, by the way, which can be bought everywhere. In ca. 15 years there’ll be an end to all this though, all deposits of silver and tin will be gone. Potosí is a UNESCO world heritage site, full of colonial houses which are testament to the wealth of olden times, and a real nice place in which to spent a few days. 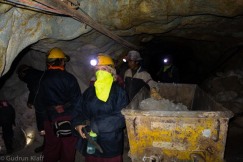 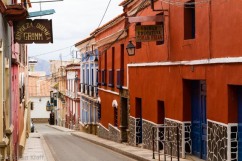 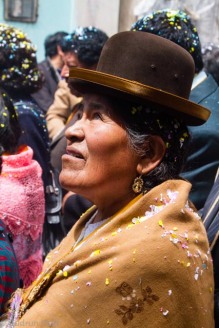 La Paz – chaotic, lively, original – a great city, which for some reason reminded me of Asia. Ca. 2 million citizens are compressed into a bowl, the transition from La Paz to El Alto on the hills is fluent, many houses are built on hills, and they come down again once in a while – in 2011, 1500 of them in one go after heavy rains.

View down from the recently opened cable car

Officially catholic, there is a booming business of witches and soothsayers – if you have a problem looking at mummified remains of foetuses and babies of llamas, sheep, birds etc, don’t go to the witches market (the official one in El Alto). I had my further fate read from coca-leaves, but can’t report any significant news, my life should still be a long one. I really liked La Paz, it would have been nice to stay longer. 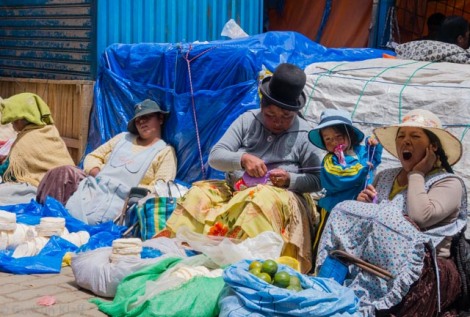 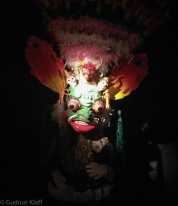 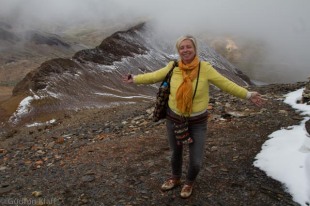 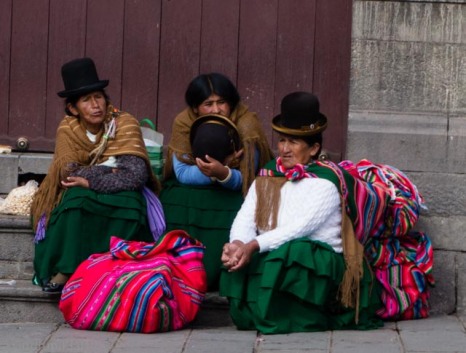 Lake Titicaca –  the highest navigable lake in the world, at over 3800 metres. The lake is very big and very beautiful. Copacabana, the lake’s largest city, home of the revered Virgin of Copacabana (herself namesake of the beach in Brazil, for some reason) and starting point for tours to the birthplaces of sun and moon – Copa you can give a miss, unless you like small towns that have been corrupted by tourism. The Islas del Sol y de la Luna are very pretty though. 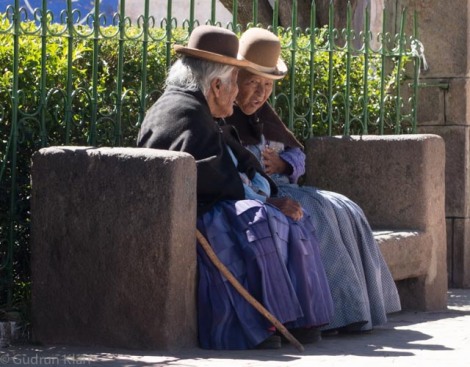 A beautiful ritual in Copa – you can have your prettily decorated car blessed by a priest – not a bad idea considering the condition of Bolivia’s roads.

At the end, a few of my guidebook’s taxi ride survival tips for Bolivia, using the example of my first taxi ride in Bolivia, in Potosí. Rule #1: Take an official taxi. Right. There weren’t any official looking taxis around anywhere, I finally flagged one down which had a handwritten “taxi” sticker on the windscreen. He didn’t want to take me, more luck with the second one. Rule #2: Ask the price before you get in, and negotiate. The driver quoted double the price of my guidebook, but as it still was little in Euro terms, it was raining, and I wanted to arrive, I agreed. Rule #3: Don’t accept other people getting into the taxi with you, as you need to pay for them. Shortly after we drove off, the taxi driver stopped and other people got into the taxi. My weak “eh – no!” was ignored. I remembered that the price was quite low, and accepted it. The people got out again at some point, the driver reassured them that I would pay. Rule #4: Do not pay before you got your luggage. We arrived at my hostal, the driver turned around and demanded his money. This time, I stayed firm – not without my luggage. I clutched my money and remained seated until the driver finally got out and went to the boot. Ok, survived the first taxi ride in Bolivia.

And this for the Austrians among us – there is a campaign to get Austria its coast back, Italy, beware!